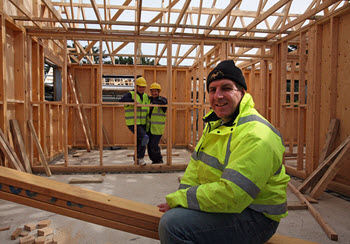 Call it the “pause that refreshes?”

The housing market endured a tough slog through most of 2018, but one home builder is adamant that a rebound is in store. That outlook, from Lennar Corp. LEN, -0.93%   executives, was enough to propel company shares up 10% this week, even as the company and a peer, KB Home KBH, +0.81%   both declined to provide formal guidance for the full year.

Both firms reported earnings Wednesday. Lennar’s net income beat expectations, but revenue, deliveries and new orders all missed. Investors were initially disappointed that management had decided against guiding beyond the first quarter, citing “uncertainty in the homebuilding market today.” But after a call with analysts, that changed.

“With recent pressure on both volume and margins, many have become concerned that the housing market has completely stalled,” Executive Chairman Stuart Miller said. “We still do not agree. As rates have started to ease, we have seen traffic pick up. Therefore, we continue to believe the market has taken a natural pause. It will adjust and recalibrate, and demand, driven by fundamental economic strength, will resume.”

Lennar is confident enough in the market, in fact, that Beckwitt had this to say in response to an analyst question about whether market uncertainty was causing the company to hold off on purchasing land. “We do opportunistically take advantage of market weakness,” he said. “When builders pull back from opportunities, it gives us an opportunity to swoop in generally on something that could be shovel-ready at a price that’s more competitive than it was under contract.”

KB Home executives had less to say about the macro environment, but in prepared remarks, CEO Jeffrey Mezger said, “The economy is expanding. Consumer confidence is high. Employment is strong, wages are growing, and household formation is increasing. Alongside these positive factors, the supply of existing homes remains low at 3.9 months nationally, and below that level in many of our markets, and single-family housing starts for 2018 will once again be well under the long-term annual average.”

But Mezger took a more holistic view of housing headwinds than Lennar’s team, noting “heightened affordability pressures” rather than just rates. The 30-year fixed-rate mortgage averaged 4.78% throughout the fourth quarter, up from 3.92% during the same period in 2017. But home prices are also a key part of affordability.

The KB Home strategy may be just what the housing market ordered, but Wall Street didn’t like it much. On Wednesday, Wedbush analysts reduced their price target to $22 from $23, citing “slower order growth in [the first fiscal quarter] versus our prior assumptions as well as a downward shift in price mix.” They kept a neutral rating on the stock. In contrast, the analysts trimmed EPS estimates, but not price targets, on Lennar, on which they have an outperform rating.

And for the week to date, Lennar shares are up more than 11%, while KB Home’s have gained 5%.

Print Details
Previous post
Next post
Smile Weekend Warriors... It's Your Weekend
And Now, The Landscape Trends Of 2019