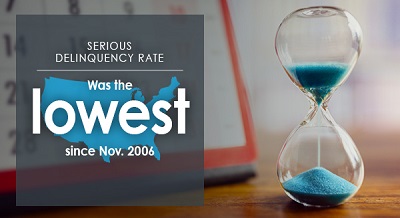 CoreLogic® (NYSE: CLGX), Irvine, today released its monthly Loan Performance Insights Report, which shows that, nationally, 4.1% of mortgages were in some stage of delinquency (30 days or more past due, including those in foreclosure) in October 2018, representing a 1 percentage point decline in the overall delinquency rate compared with October 2017, when it was 5.1%. This was the lowest for the month of October in at least 18 years. 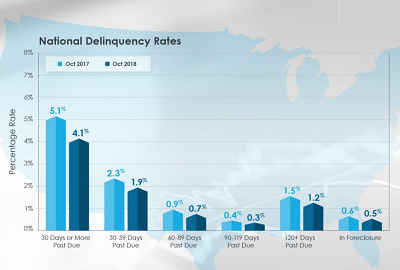 Measuring early-stage delinquency rates is important for analyzing the health of the mortgage market.

“While the strong economy has helped families stay current and push overall delinquency rates lower, areas that were hit hard by natural disasters have seen a rise in loan defaults,” said Dr. Frank Nothaft, chief economist for CoreLogic. “The 30-day delinquency rate in the Panama City, Florida metro area tripled between September and October 2018 as a result of Hurricane Michael. Two months after Hurricane Florence made landfall in the Carolinas, 60-day delinquency rates doubled in the Jacksonville, Wilmington, New Bern and Myrtle Beach metro areas. And buffeted by Kilauea’s eruption in the Hawaiian Islands, serious delinquency rates jumped on the Big Island by 9% between June and October 2018, while falling by 4% in the rest of Hawaii.”

Hurricane Irma and Hurricane Florence (2017 and 2018, respectively) continue to impact some metropolitan areas, with mortgages transitioning from current to 30 days past due. This October, 18 metropolitan areas posted an annual increase in overall delinquency rate, seven of which were either in North or South Carolina. In the coming months, CoreLogic will continue to monitor these and other metros struck by natural disaster for potential increase in delinquencies.

“Despite some regional spikes related to hurricane and fire impacted areas, overall delinquency rates are near or at historic lows,” said Frank Martell, president and CEO of CoreLogic.

Print Details
Previous post
Next post
Homebuilder sentiment drops in December to the lowest point in more than 3 years
Smile Weekend Warriors... It's Your Weekend