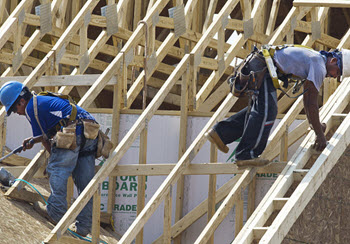 Homebuilder sentiment dropped in December to its lowest point in more than three years while potential buyers hesitate to purchase new homes even as mortgage rates have pulled back in the past month.

According to the National Association of Home Builders/Wells Fargo Housing Market Index, homebuilder sentiment declined 4 points in December to 56. That is the lowest reading since May 2015 and well below December 2017′s level of 74. This comes after an 8-point drop in November. Anything above 50, however, is considered positive sentiment.

“We are hearing from builders that consumer demand exists, but that customers are hesitating to make a purchase because of rising home costs,” said NAHB Chairman Randy Noel, a homebuilder from LaPlace, Louisiana. “However, recent declines in mortgage interest rates should help move the market forward in early 2019.”

Mortgage rates jumped at the start of 2017 and then again in September to the highest level in eight years. They fell back slightly in November, but were still nearly a full percentage point higher than a year ago. Newly built homes come at a price premium to existing homes, and are thus more sensitive to any changes in affordability. Mortgage rates are widely expected to move higher in 2019.

Homebuilders have been focused on the move-up and luxury sectors, even though demand for entry-level homes is high. Builders say that given the high costs of land, labor and materials, they are unable to build as many starter homes as they might like. Home prices for new and existing homes have soared over the past few years, as demand dramatically outpaced supply.

Of the index’s three components, current sales conditions fell 6 points to 61, sales expectations in the next six months dropped 4 points to 61, and buyer traffic fell 2 points to 43.

Regionally, on a three-month moving average, builder sentiment in the Midwest dropped 2 points to 55; the West and South both fell 3 points to 68 and 65, respectively; and the Northeast plunged 8 points to 50.

“The fact that builder confidence dropped significantly in areas of the country with high home prices shows how the growing housing affordability crisis is hurting the market,” said NAHB Chief Economist Robert Dietz. “This housing slowdown is an early indicator of economic softening, and it is important that builders manage supply-side costs to keep home prices competitive for buyers at different price points.”