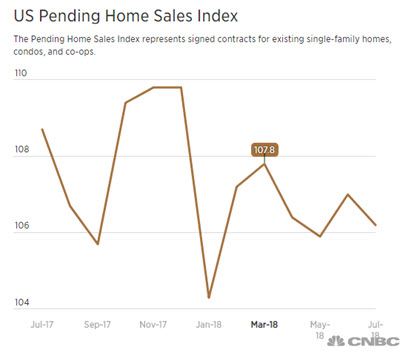 It may be hot in the nation's neighborhoods now, but the U.S. housing market is cooling off.

"It's evident in recent months that many of the most overheated real estate markets — especially those out West — are starting to see a slight decline in home sales and slower price growth," Lawrence Yun, chief economist for the Realtors, said in a release. "The reason sales are falling off last year's pace is that multiple years of inadequate supply in markets with strong job growth have finally driven up home prices to a point where an increasing number of prospective buyers are unable to afford it."

Buyers have been struggling to find affordable homes this year, as the supply of homes for sale has fallen annually for most of the year. It was finally flat in July, but the market needs a significant surge in new listings in order to cool prices and boost sales.

Home prices are still rising at a fast pace. They were up more than 6 percent in June, according to the latest report from S&P Case-Shiller. The pace, however, is moderating very slightly. Prices usually lag sales, and sales have been slowing all year. Affordability is being further weakened by higher mortgage interest rates. The average rate on the popular 30-year fixed mortgage is about a half a percentage point higher now than it was at the start of this year.

Sales are weakest in the West because that is where affordability is worst. Homebuilders are most active in both the South and West, but mostly not at the lower end of the market, where demand is strongest.

Some major markets in the West, including Denver and Seattle, which have been incredibly hot and competitive, are starting to see more supply come on the market. That could cool prices slightly, and bring more buyers back.