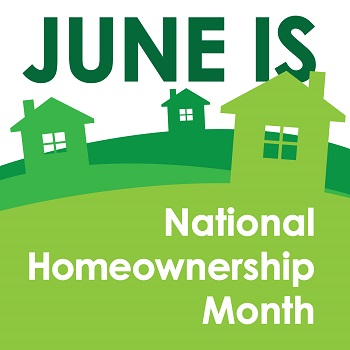 June is National Homeownership Month, and the industry is recognizing the importance of homeownership as a milestone of the American Dream.

This year’s theme, set by the Department of Housing and Urban Development (HUD), is “Find Your Place.” HUD is one of many agencies that provide resources to help consumers obtain and sustain homeownership. Through its network of housing agencies, consumers can seek out counselors for homeowner education, foreclosure prevention and budgeting assistance. With mortgage options through the Federal Housing Administration (FHA), consumers with low credit or low-down payment funds can reach their homeownership goals faster—a significant method of aid for millennials and upcoming buyer generations flooded with student loans, making it difficult to amass the funds needed for conventional financing. According to HUD, over 47 million homeowners since 1934 purchased a home with a mortgage insured by FHA, and around 40 percent of all borrowers purchase their first home using an FHA loan.

“Homeownership serves as an enduring symbol of security and prosperity, and it provides many Americans with a legacy they can pass down to their children and grandchildren,” said HUD Secretary Ben Carson in a statement. “During National Homeownership Month, we recognize the abiding value of owning a home, and we rededicate ourselves toward helping hard-working families to find their place in the American dream.”

Although homeownership rates are currently stalled at 64.2 percent, experts say the lack of dramatic increase is a reflection of a market that is withstanding challenges such as low inventory and rising interest rates. While the number has not moved much since the first quarter of 2017, there have been gradual increases since 2016, following a significant drop after the housing crisis.

“National Homeownership Month is a time to celebrate and promote the modern American Dream of owning a home,” said Mendenhall in a statement. “Homeownership changes lives and enhances futures, and many Americans see it as one of their greatest hopes.

In addition, Freddie Mac’s website for National Homeownership Month provides valuable resources for homeowners, such as educational articles, homeownership program statistics and opportunities consumers can take advantage of in order to make their homeownership dream a reality.

According to the National Association of Home Builders (NAHB), primary residences are ahead of all other financial assets, business interests and retirement accounts, accounting for nearly one-quarter of all assets held by households in 2016, as reported in the latest edition of the Federal Reserve’s Survey of Consumer Finances.

“Homeownership is a primary source of net worth for many Americans,and is an important step in accumulating personal financial assets over the long term,” said Randy Noel, chairman of the NAHB, in an interview on NAHBNow.