What's Up With Homeownership? 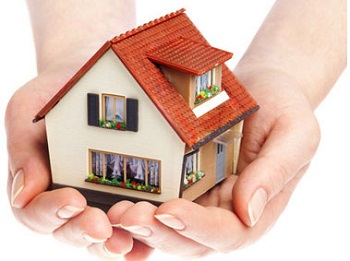 We're with those who see the glass as half full on home-ownership rates.

Historically--from the time of the post-World War II era--the 30 to 34-year old segment of young adults in America served as the watershed moment of homeownership, where at least one out of two adults in that age group owned vs. rented their home.

The Great Recession ended that run of history, as home-ownership rates among adults aged 30 to 34 fell below the 50% mark--starting in 2011--and have continued, mostly, to fall to where they're now 46.3%. 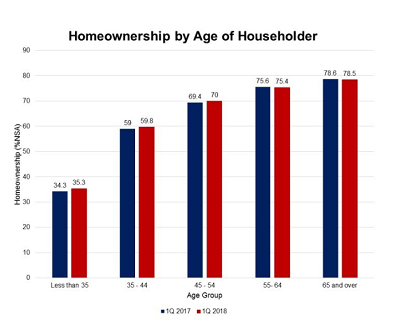 However, when we use the term Millennials and describe the generation's home-ownership rates of ownership vs. renting, the important, bellwether group to look at for signs of what's to come is the leading edge--35 to 39 year olds. Trulia senior economist Cheryl Young looked at the changes in home-ownership rates from the fourth quarter of 2017 to the first quarter of 2018, and appears to have drawn the wrong conclusion. She writes:

Millennials have emerged as the most dogged homebuyers with those under 35 far outpacing the overall annual homeownership rate change, despite contending with the most vexing portion of the housing market.

Still, if you look at the 35 to 39-year-old set, that's where the positive growth, albeit more modest, was positive growth in home-ownership rates. Here, as New Strategist Press demographer and editorial director Cheryl Russell notes, there's a glass-half-full or glass-half-empty statistical trend in the making. Russell writes:

In the first quarter of 2018, the home-ownership rate of households headed by 35-to-39-year-olds cracked the 57 percent threshold for the first time since 2012. These no-longer-young adults just might be buying homes. Feelings of jubilation should be tempered by the fact that the current home-ownership rate of 35-to-39-year-olds is well below their peak rate of 65.7 percent reached in the first quarter of 2007.

Now, almost everyone would agree that the 2007 level reflected phantom wherewithal up-and-down the housing finance food chain and shouldn't serve as a reasonable mark to aspire to for home-ownership rates.

But, expectations among most of the experts are for an economy that continues to improve--with headroom for at least a couple of more years. And if it does, it will produce jobs, and increase take-home pay with lower taxes, and people will couple up and plan families, and they'll pay down college debt, and get help on down payments, and start to feel their rental homes are too small. Under those circumstances, a home-ownership rate of 60% in the 35 to 39-year old segment would not be an outlandish notion.

The U.S. added 1.3 million owner households over the last year and lost 286,000 renter households, the fourth consecutive quarter in which the number of renter households declined from the same quarter a year earlier. That could pose challenges for apartment landlords, who are bracing this year for one of the largest infusions of new rental supply in three decades.

What apartment landlords know that may not be as clear to observers like Kusisto is that the law of absolute numbers and the fact that both Generation X and Baby Boom generation folks are a growing stream of demand for rental apartments mean that real demand for for-rent units will remain at high levels for another decade or more. That being said, that demand can't be met if all the development is in the high end of the market.

The real issue here is that preference for homeownership continues to pronounce itself once young adults reach the point in their lives where they're making real grown-up decisions on family formation. These days, more often than not, those decisions occur later--post 35 years old--than they used to. Which is why the push for homeownership strengthens at that point, a kind of wait-and-hurry-up phenomenon.