Dedicated Dog Showers Are A Hot Trend In Home Design 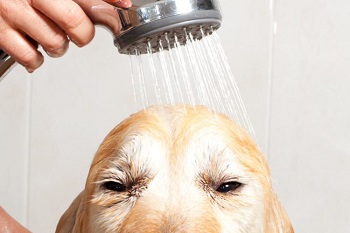 If you’ve ever had to deal with the effects of dirty dog scampering around your home, you’ll appreciate the newest trend in home design. According to a recent report, the must-have feature many homebuyers want nowadays is not a three-car garage or a horizontal-wood fence—it’s a shower space dedicated for dogs!

According to The New York Times, an architecture company in New Jersey has decided to build a doggy bath inside every $800,000-and-up home it builds from now on. Fans of HGTV’s “Fixer Upper” will also likely recall the “doggie spa” that Chip and Joanna Gaines built for a client during the show’s fourth season.

It’s no secret that many people think of their dogs as furry family members, rather than just animals they own, and they aren’t afraid to spend serious money on them. A 2011 U.S. Bureau of Labor Statistics study reported that households typically spend more than $500 a year on their pets, and a 2017 survey showed that millennial homebuyers cited their dogs as one of the main reasons they bought a home in the first place. So, for dog owners who have the budget to afford one, a shower station might be a practical addition to their home.

As Ken Malian, an owner of GreenRose Fine Homes and Design, told The New York Times, “When you walk a dog, whether you’re out in fields or walking on the sidewalks, your dogs pick up salt and mud.” And that means muddy paw prints all over your carpets or floors when the dog comes back inside!

While dogs can be bathed inside regular human bathtubs, there are several benefits to having a dedicated dog shower. For one, most dogs are not a fan of baths to begin with and may squirm or try to wiggle away while an owner is sudsing them up, creating a big mess. Worse, a dog may even try to jump out of the tub, which isn’t safe and could lead to injury.

Even after bathtime is over, sharing a bathtub with a pet means having to deep clean the tub after every dog bath. Unless of course you don’t mind seeing tons of fur everywhere when you take a shower yourself!

Check out the dog shower below that Virginia-based Bushman Dreyfus Architects designed for one of its clients: 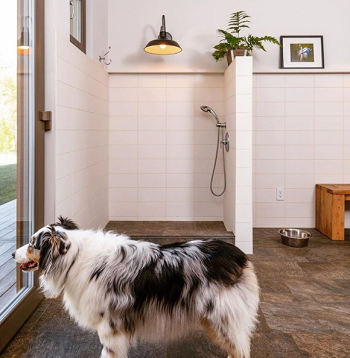 How Much Does It Cost?

If Pinterest is any indication, dog washing stations are often built inside of mudrooms or laundry rooms. While it’s not typically too costly to add a plumbing line to those rooms, depending on the size and kind of tile you use and how fancy you want it to look, the cost of a dog shower could cost run up to about $3,500 for a professional installation. DIYers may be able to build one for less by doing some of the work themselves, according to PetsBest.com.

As far as resale value goes, some architects, like Oregon-based Lisa Christie, believe it adds value to your home, even if the next owner doesn’t own a dog.

“Even if you don’t have pets, a dog shower can be used for many other practical uses, like rinsing off dirty kids or muddy boots, and are great for easy cleanup from messy craft projects,” Christie told NBC’s “Today” show.

Print Details
Previous post
Next post
Want to Buy a New Home This Year? Check Out the 2018 New Construction Forecast
Smile Weekend Warriors... It's Your Weekend!